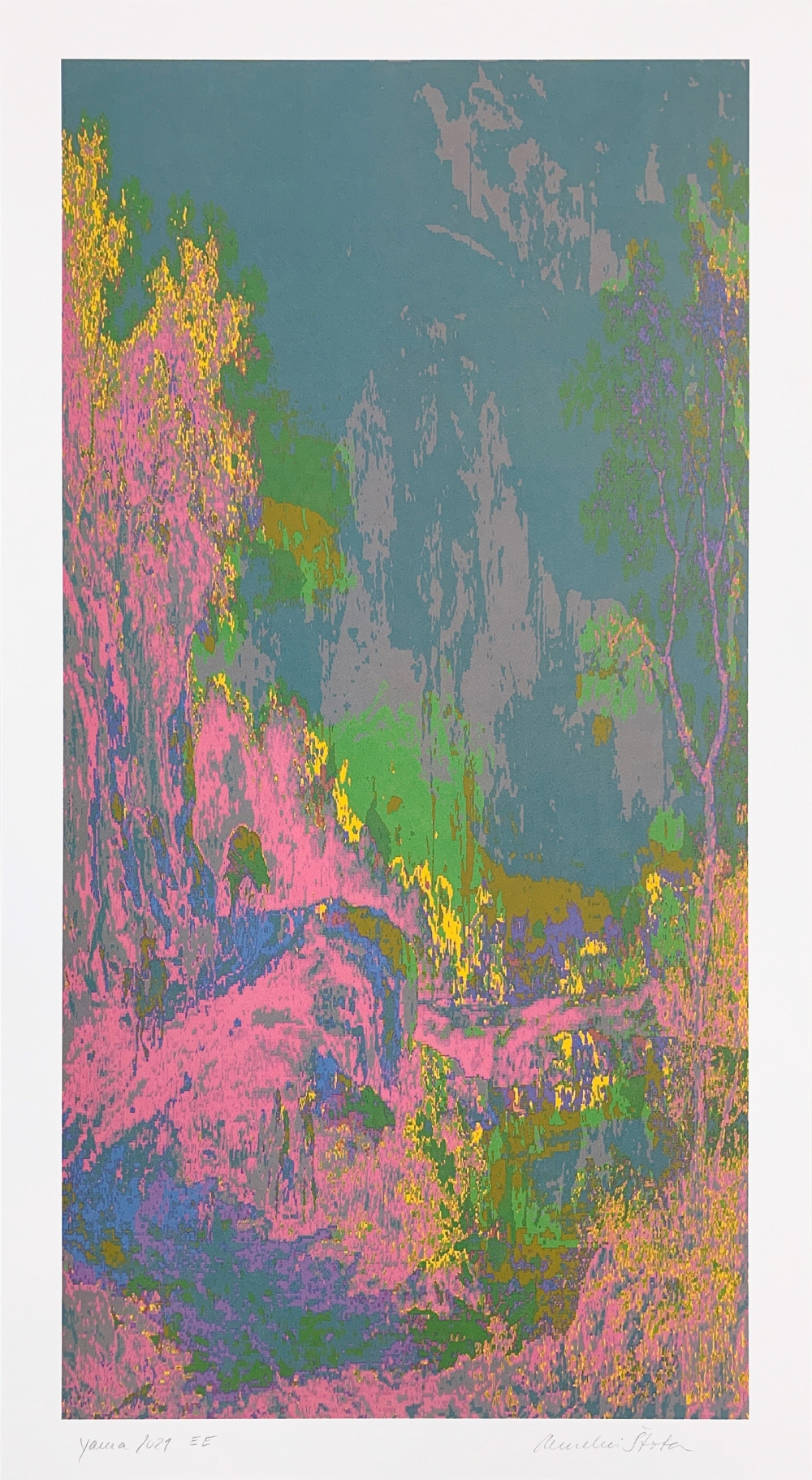 "If the image were to be in focus for even a fraction of time, it would wake you up from the dream".1 So it is with the current work by Annelies Štrba entitled yama. The word stands for mountain in Japanese. We see a landscape that is difficult to recognize, a part of a mountain, trees, grass and an unidentifiable expanse in deep green color. There are all sorts of small, colorful details to be discovered, but the determination and interpretation of these is left to the viewer. It is also unclear whether it is a landscape in Switzerland or possibly in the Far East. The silkscreen in six colors, produced by the master printer Lorenz Boegli, reveals a rich color application. It is almost reminiscent of a woodcut in its colorful feel, until one discovers the screen matrix upon closer inspection. The association of the unusual format with Far Eastern scroll paintings is also inevitable with the title yama. The idea of producing the photo as a silkscreen arose from the fact that the alienation of the image is almost pixel-like, which of course can be translated in an interesting way with a silkscreen grid. The painterly components of the photo are not to be overlooked. And it is here that the interesting encounter between photography, painting, drawing and printmaking becomes apparent. Where does one medium begin and the other end? Štrba mostly uses a digital camera to capture moments and figures in situ. The digital manipulations often give Štrba's images a painterly component. These allow her to forgo realistic details of the images in favor of complex visual textures. She often focuses so much on one color that the image loses its resolution and its contours melt into a shimmering semi-abstraction. With their pale colors and low, almost pointillist resolution, these images never let us forget that they were created with technical means; on the other hand, they seem like fleeting memories. The emotions evoked show an enigmatic and beguiling world - marked by a pinch of romanticism and sensuality. Her best-known works are based on series of works around her family and nature, which are always based on several fictitiously suggestive meta-levels. They are creations of fantastic worlds, taken from reality and alienated by clever combinations. On the one hand, image details, on the other hand, layers and colors, as well as the blurred perspective play a major role. The artist never reveals how this is done. Annelies Štrba was awarded the Willy Reber Art Prize for her work in 2020. Her works have recently been shown at the Museum Rietberg as well as at the Landesmuseum Zurich, and institutional solo exhibitions have been dedicated to her at the Kunsthaus Zug or the Gemeente Museum in The Hague, among others. Her works are represented in the collections of numerous museums, such as the Centre Pompidou in Paris, the Hamburger Kunsthalle or the Kunsthaus Zürich. 1) Annelies Štrba quoted after John Hutchinson, im Wald, in: My life’s dreams, Stuttgart: Arnoldsche Art Publishers, 2012, S. 10. 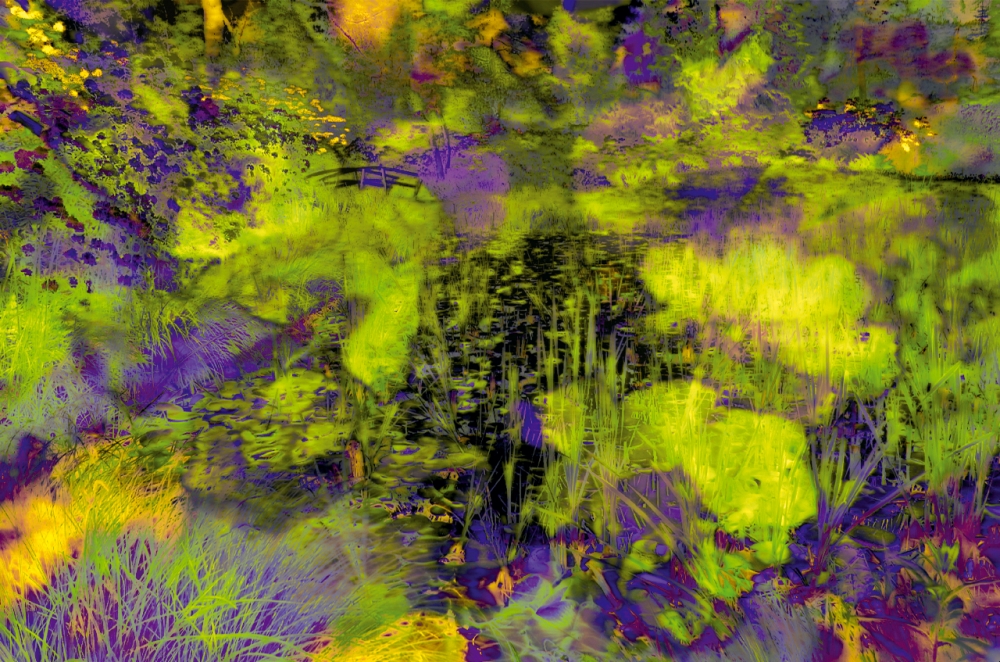 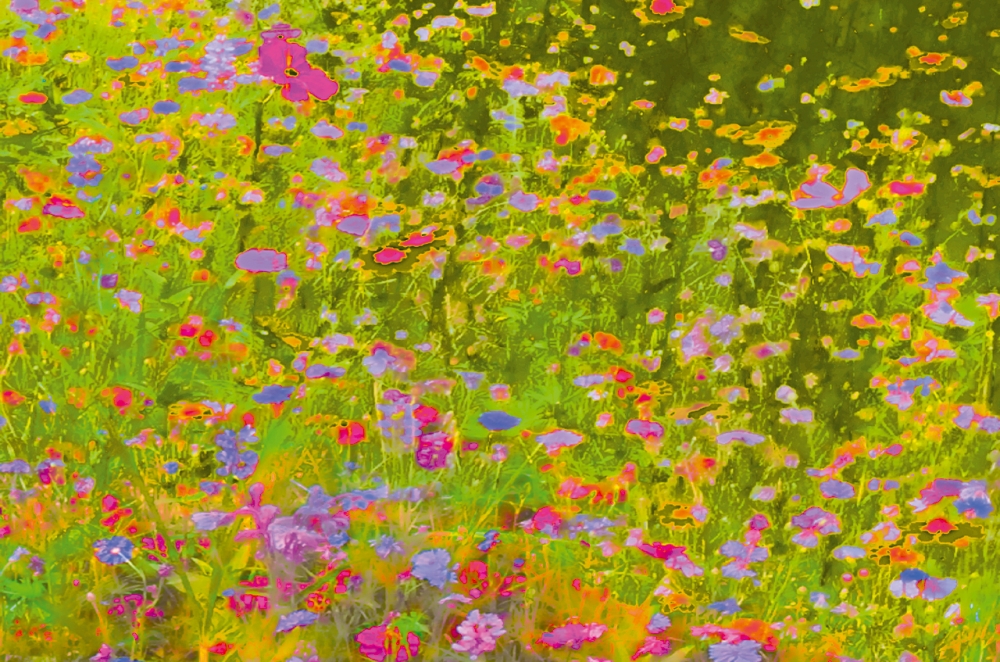 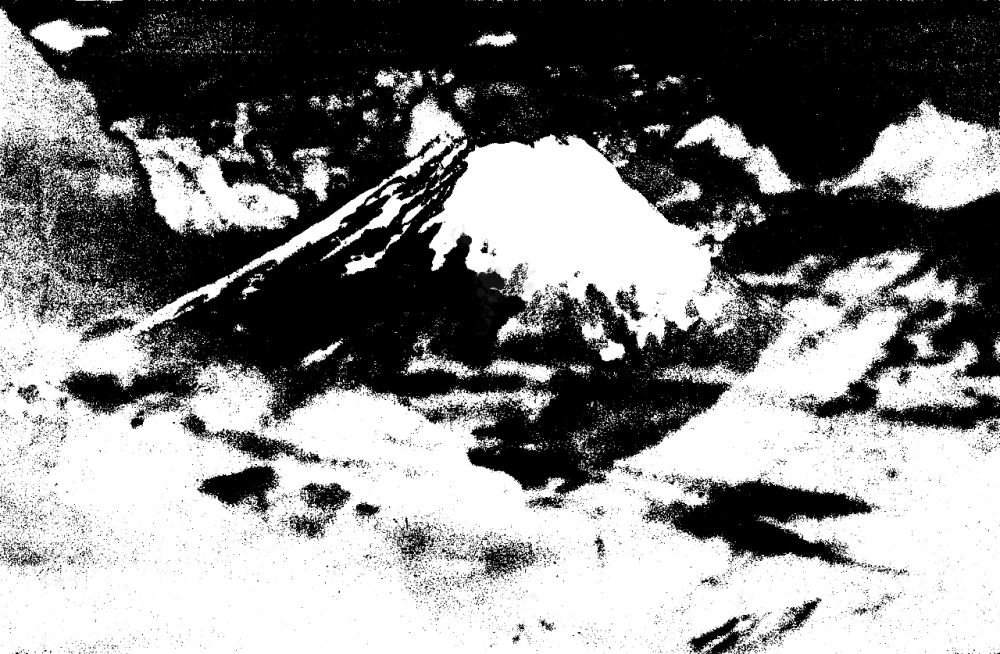 With the pictures of Annelies Štrba we move in another world, in a world of "uncompromising beauty". A garden, a meadow, a mountain. We immerse ourselves in beguiling colours, let ourselves be seduced: violet, green, orange, pink and then, then, the intoxication of colour is followed by a sobering image in brittle black and white. The third leaf forms a strong contrast, but also intensifies the breathtaking colours of the first two leaves. A small bridge at the back left of the first illustration is reminiscent of Claude Monet's "Pont japonais". The elevation on the third work is the famous Japanese mountain/volcano Fuji.
"It is important to me that with the processing I get exactly the picture I imagine inside: It is always said that photography is painting with light, but you don't see that in normal photography, there you have black and white, light and shadow - only with the processing I can bring out the light I imagine and thus really work with light: I take something and make something else out of it, [...]." (Annelies Štrba in an interview with Rudolf Velhagen, catalogue "Summerending. Collaboration Adrian Schiess & Annelies Štrba", Museum Langmatt, Baden 2011). 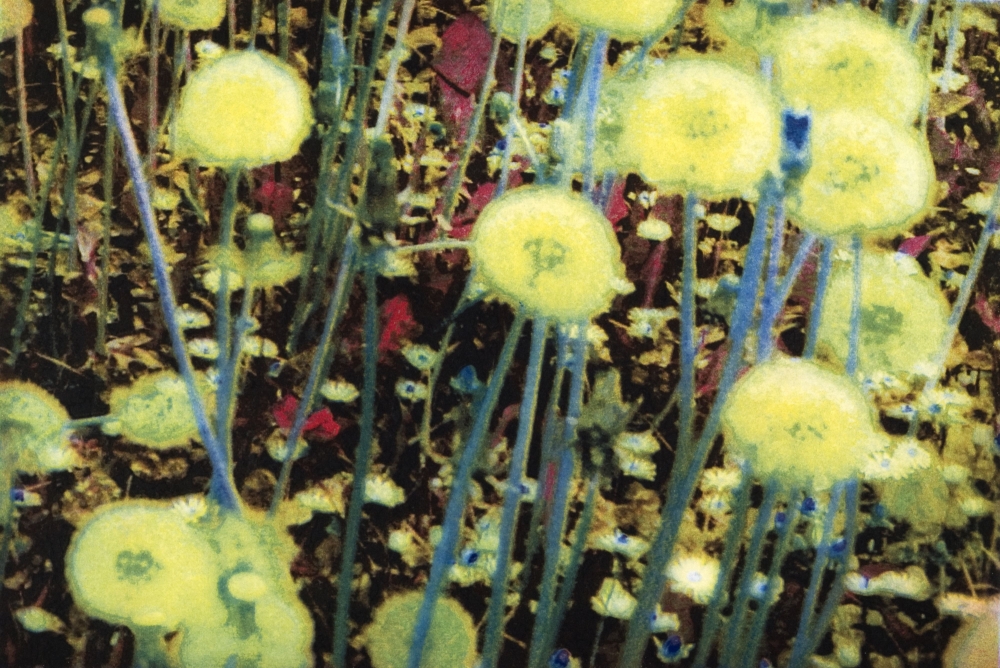 The artist has chosen a flower meadow from the large collection of family portraits, family scenes, landscapes and architecture for this work. Faded dandelions shine towards us in a delicate green, a click later the seeds may already be flying from the flowers. Dabs of red blend into the picture and send signals. The green basic chord sounds gently across the leaf and creates a surreal carpet of colour. The meadow is removed from real nature, or from what we have commonly defined as the real. The flower meadow as a symbol of untouched, simple and natural beauty is put on paper using a special intaglio printing technique (photopolymer process). The colourful abstraction of the picturesque nature corresponds to its artificial creation in the printing workshop. 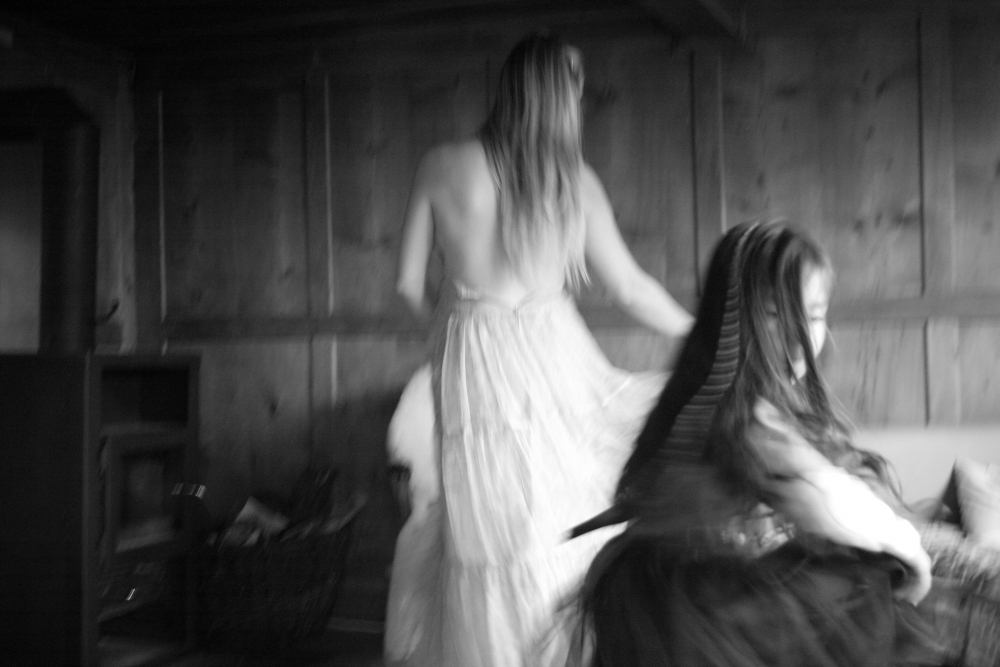 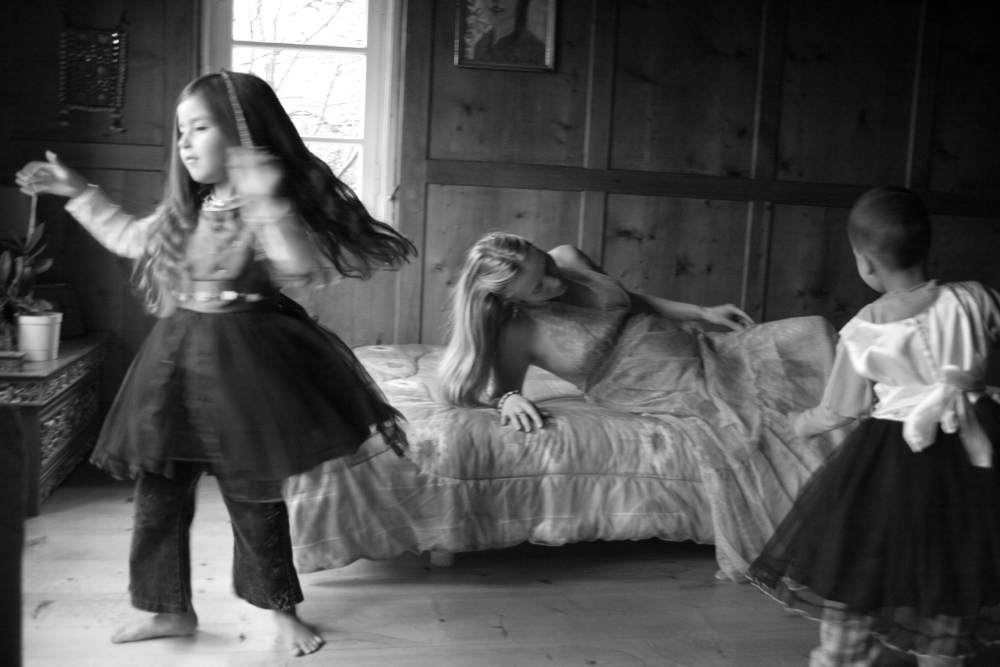 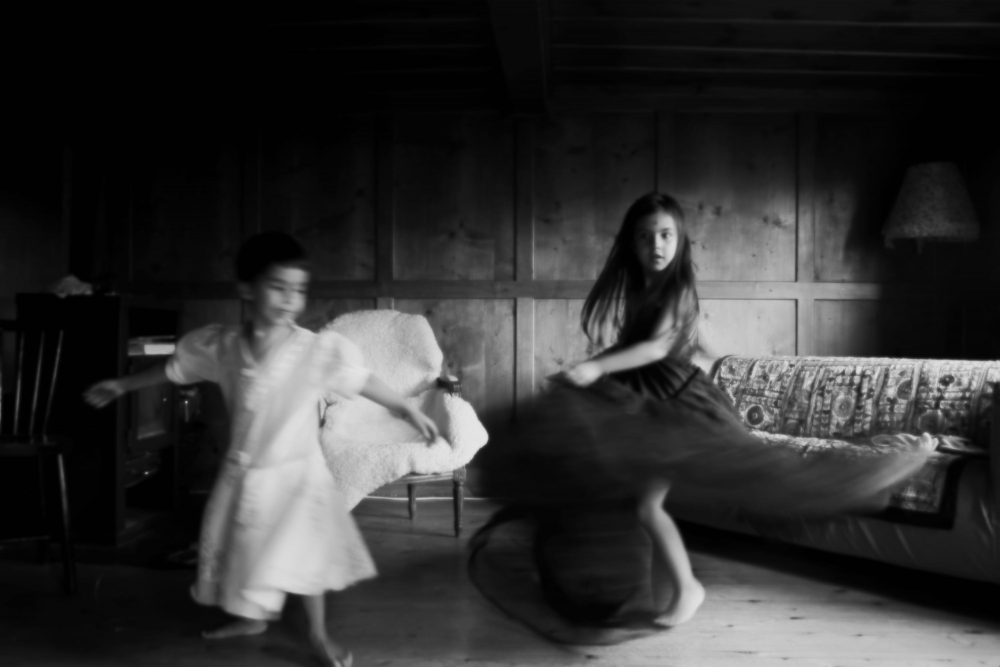 Annelies Štrba has been taking photographs since the age of 15, and her family is one of the most important motifs in her work. After working with the video camera was a determining factor for her between 1997 and 2005, she has turned increasingly to photography again since 2005. "Betlis I-III" ties in with her earlier works "Shades of Time" and takes up the motif of dreamlike dancing beings. Immersed in themselves and their actions, we encounter women and children circling through an interior space as if in a ritual, reminiscent of fairies and fairytale figures. The photographs were taken in Betlis on Lake Walen, a place which, like Amden, is of great importance to the artist. 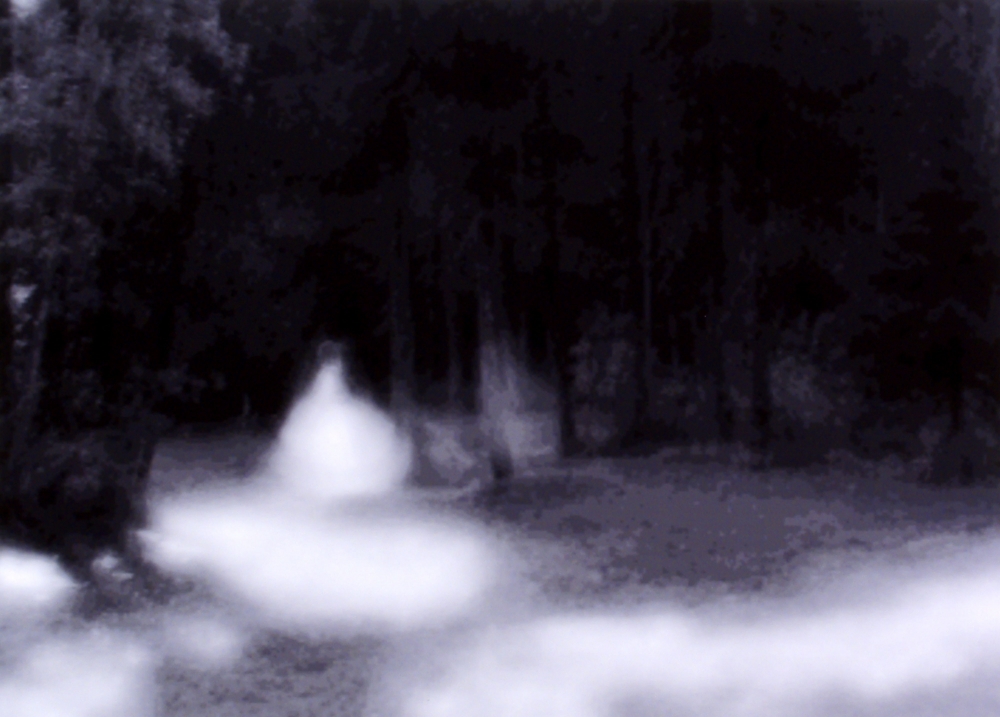 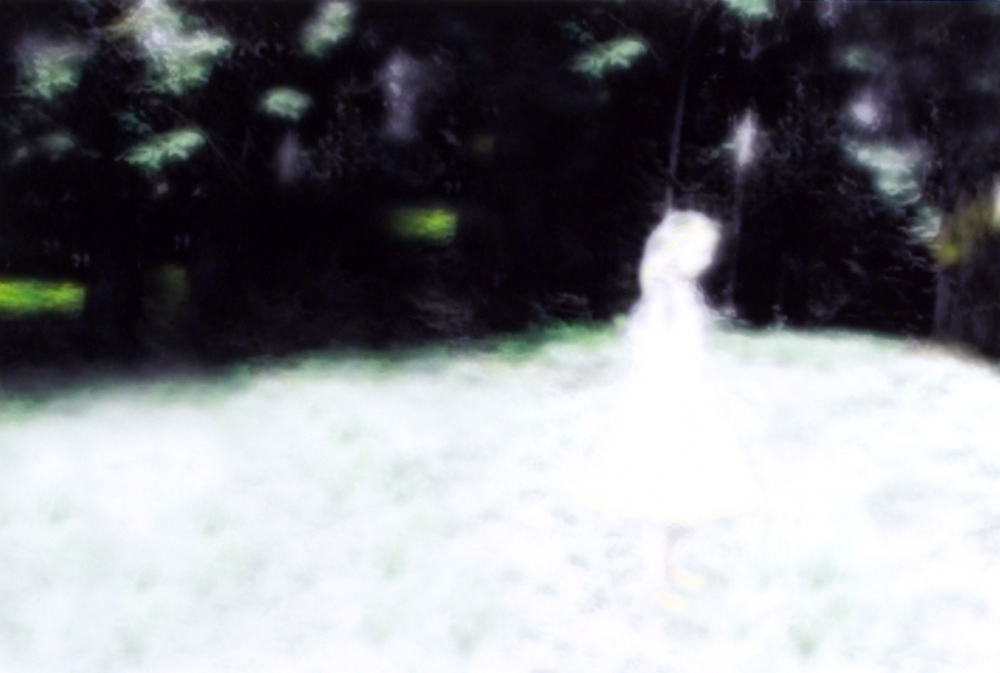 Annelies Štrba has been photographing mainly children since the age of 15, later her own family, especially her three children Sonja, Samuel and Linda, and now also her granddaughter. In addition to portraits of people, she later also took pictures of towns and gardens and parks. From 1997 to 2005 Štrba works only with the video camera. The resulting films are reworked by the artist and individual video styles are isolated to form independent works of art. Annelies Štrba's works are characterized by an exceptionally subjective inner view of the world. It is the feminine par excellence that the artist is always interested in and that she evokes in her often dreamlike and magical worlds. For the VFO Annelies Štrba has realized two works from the current cycle "Wonder" as inkjet prints based on video stills. 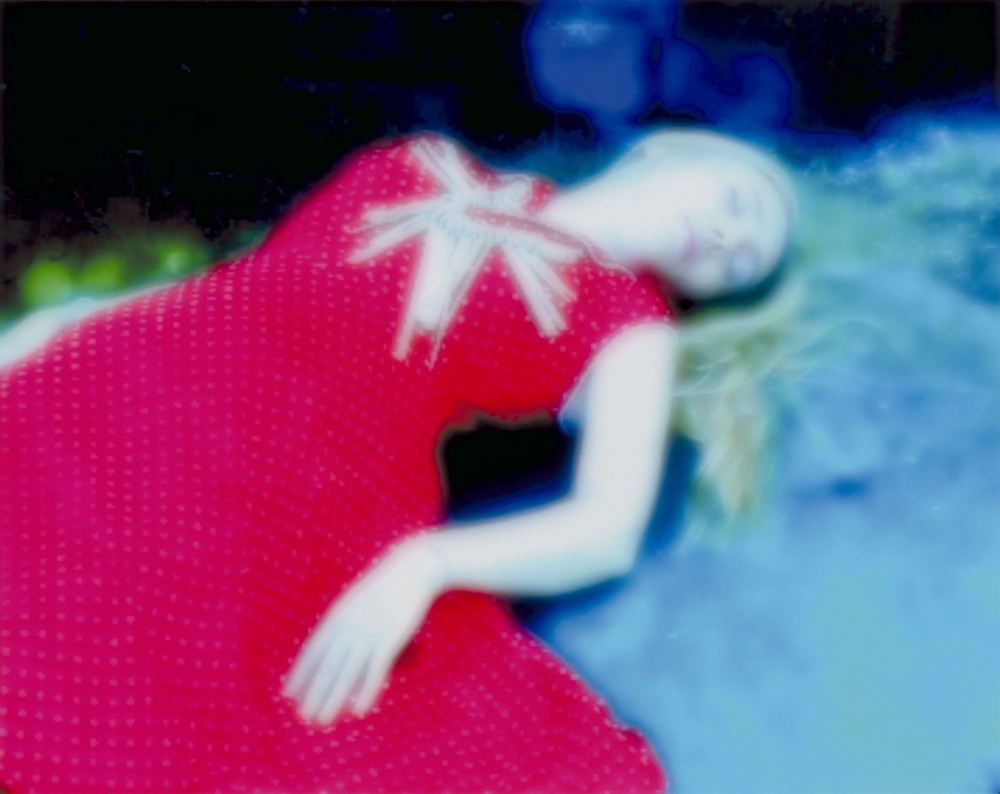 Since 1997 Ŝtrba works only with the video camera. The resulting films are reworked by the artist and individual video stills are isolated to form independent works of art. The present work is an edited video still from the cycle "Frances and the Elves". Štrba's daughter, Sonja, can be seen as a "jewelry-wearing" elf with a piano key - necklace by the internationally renowned jewelry artist Bernhard Schobinger (*1946 Zurich). A printout of this edited video still on photographic paper was used to produce the four photopolymer plates by Christina Rall, Zurich. 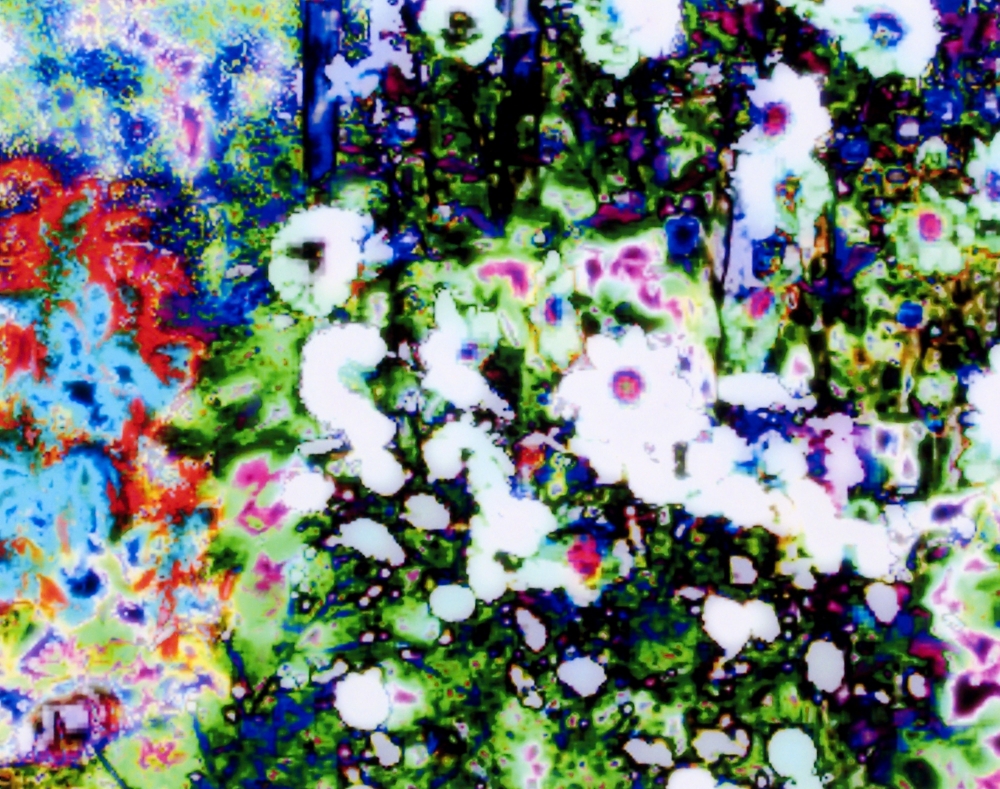 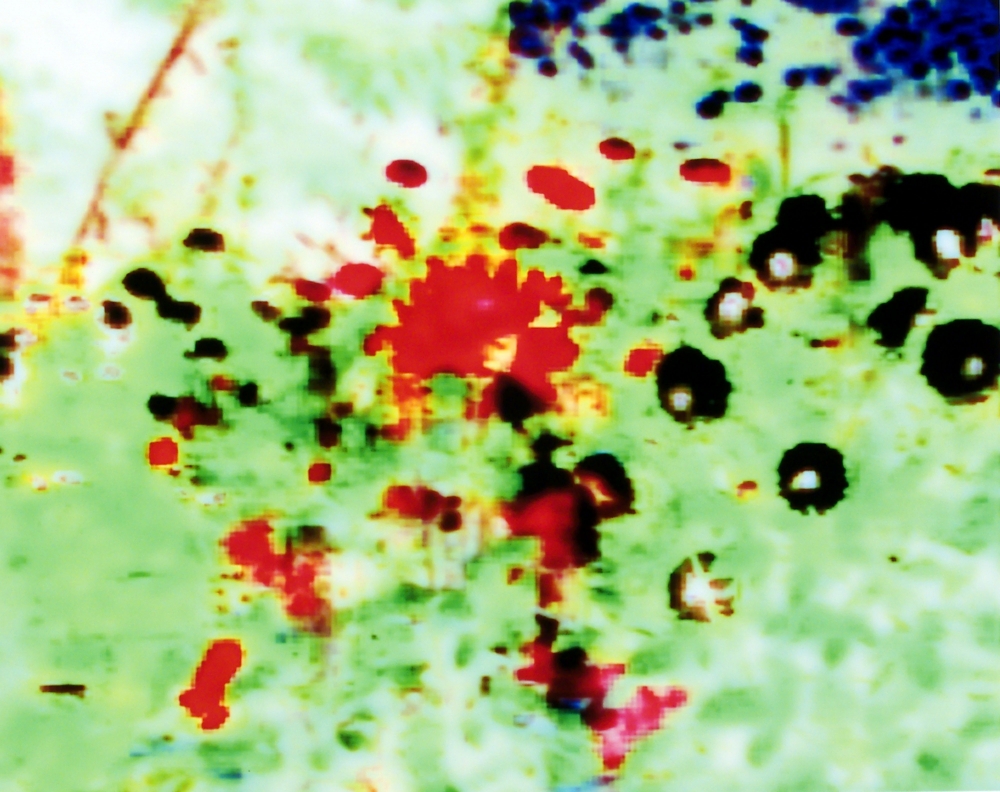 These two inkjet prints are based on video stills. In contrast to the last work (April 2003) they are digitally processed. The print on photographic paper was scanned by Beat Etter in Zurich and then printed on Hahnemühle handmade paper. 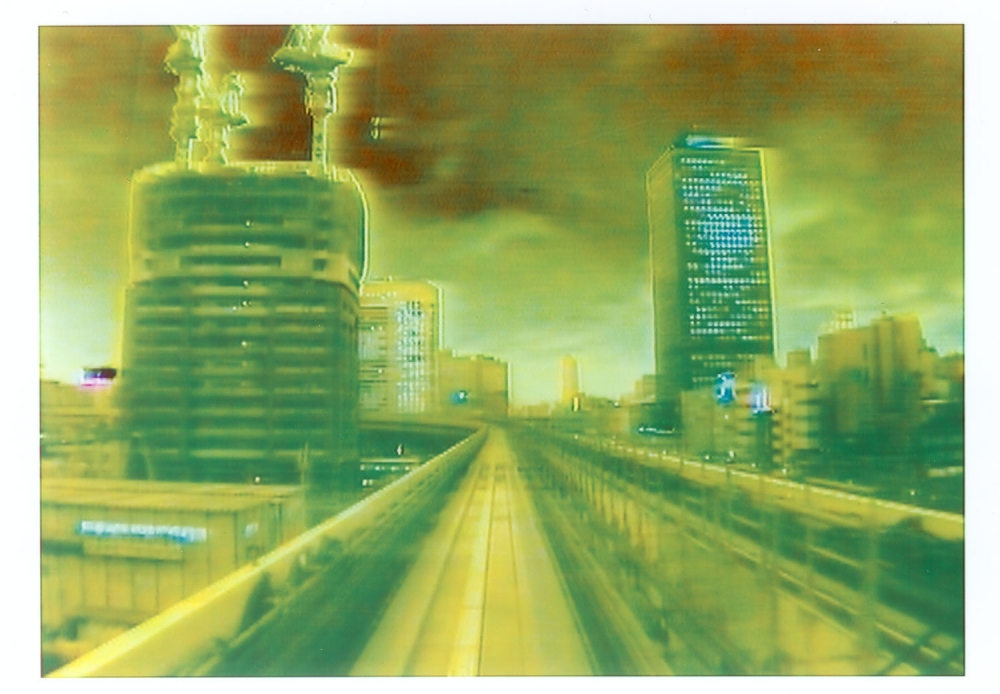 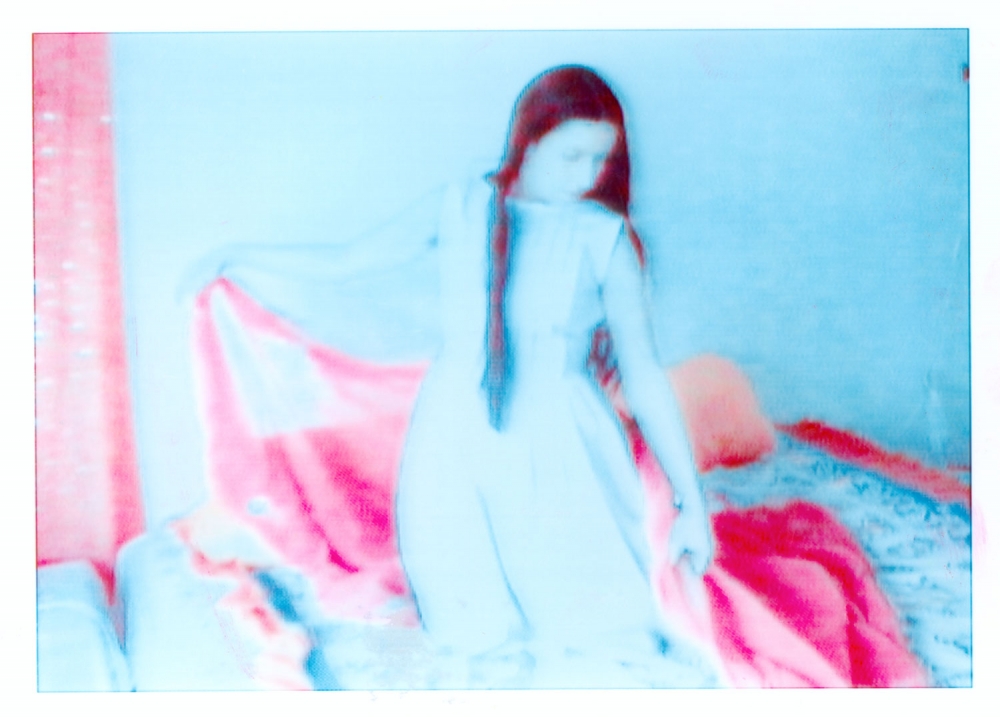 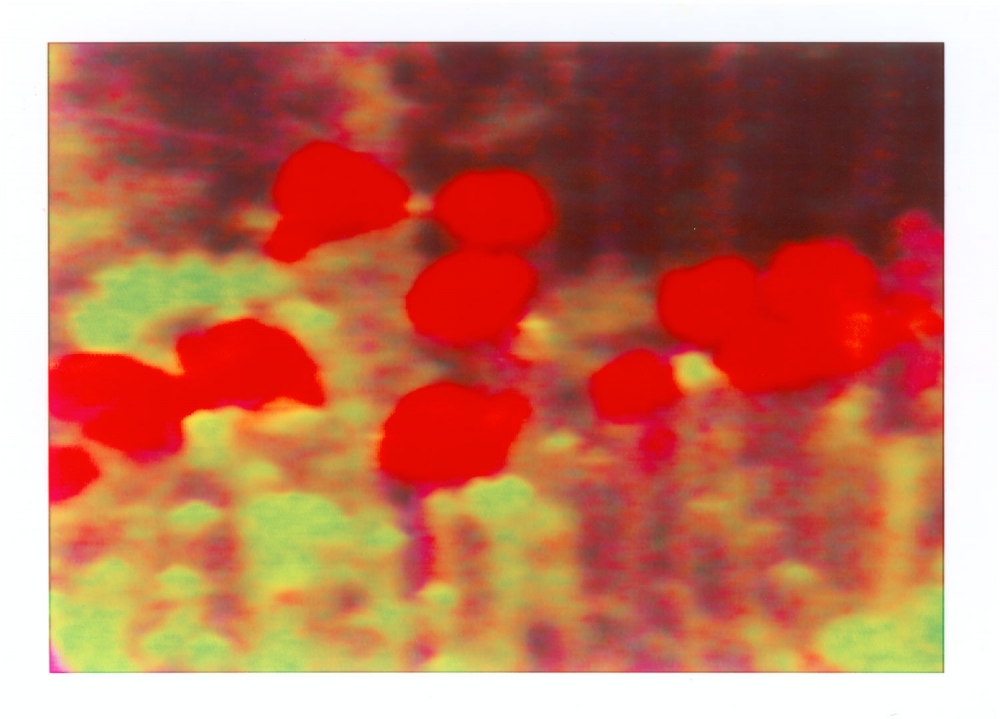 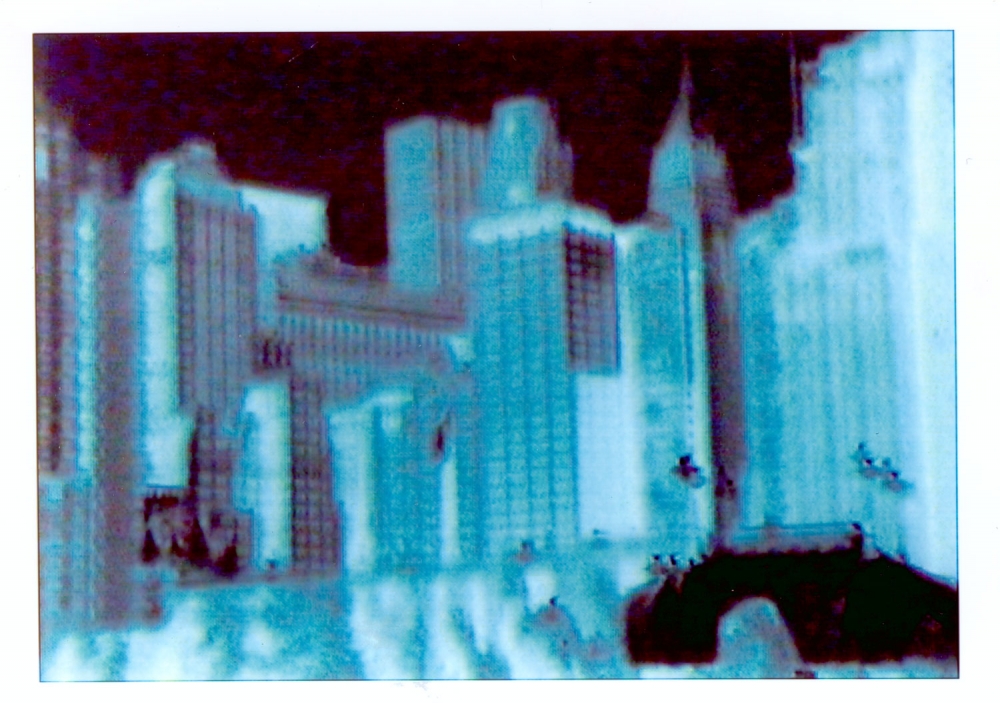