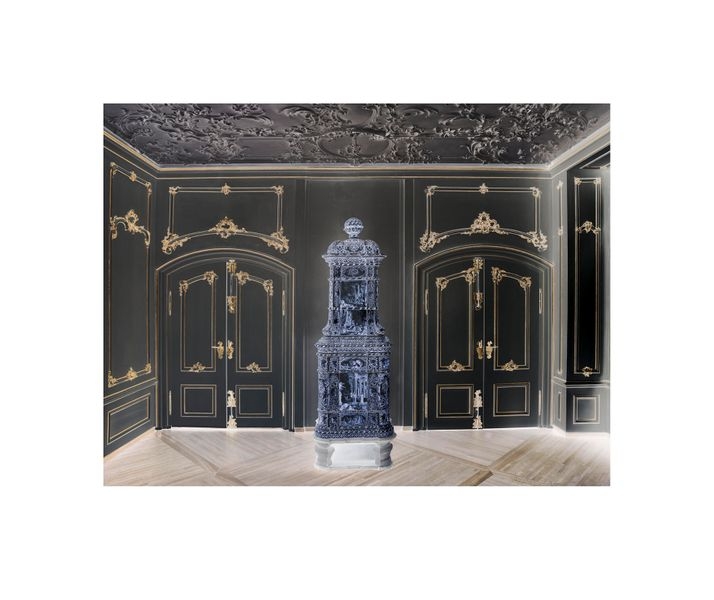 In recent years, interiors have repeatedly appeared in the work of Axel Hütte. The more recent series of works, which began in Venetian palazzi, runs through numerous European historical metropolises, and brought Axel Hütte to Zurich for the current exhibition "On Photography". The artist's interest lies in the grandiose fossilized, a historical and living reality manifested in architecture, which, like the landscape that surrounds us, shapes our visual everyday life. The color inversion used by Hütte and the almost enlarged section of the Einsiedlerzimmer in the Zunfthaus zur Meisen create an entirely surreal atmosphere. The inverted image is printed on mirror foil using a complex UV printing process, so that the dark areas are interrupted by bright reflections of light. Hütte performs the transformation of the rococo interior into a fantastic, living figure in a highly poetic manner, as if the relationship between image and imagination were the same as between imagination and dream. The magnificent interior is given new life as a negative and becomes a phantom of itself through the act of inversion. In the process, the filigree-painted and extremely rare, tiled stove plays only a spare role, or so it seems. Indeed, the dark photograph glows from a hidden plane, which allows the light to shine out from the floor and between the cracks in the door. Another peculiarity of this work is that Edition VFO, as an association for original prints, has a traditional and long relationship with the Zunfthaus zur Meisen, as for decades the general assemblies were held there annually. Axel Hütte became known for portraying empty cities and grandiose landscapes. Yet Hütte's work is never primarily about the motif itself, but about the perspective of larger contexts. His works are fragmentary representations, excerpts of "reality" that are meticulously planned down to the last detail. The artist usually shoots his pictures with a large-format camera, having already taken a precise picture of the chosen location beforehand. This approach with the complex camera makes it almost impossible to realize a previously unplanned image, because Hütte works almost in a scientific manner on the preparation and execution of potential subjects. The richness of detail and perfection of the seemingly banal become apparent upon first study of the images. Axel Hütte's photographs show landscapes in which a building nevertheless appears at the edge of the picture, or bridge pictures in which the landscape in the background seems to change to the base of the picture. And so, there are always elements of small discomfort, a Barthian punctum, that constitute the photographs. It is not about the pure representation of a place, or the mimetic reproduction of an object, but it is precisely about the field of tension in photography - the oscillation between reality, image, and imagination. Axel Hütte is a representative of the Düsseldorf School of Photography, which also achieved worldwide fame as the Becher class. Hütte's work has been the subject of numerous museum exhibitions worldwide, with recent institutional solo shows at the Museum Franz Gertsch Burgdorf, Kunsthalle Krems, Museum Kunstpalast Düsseldorf and Josef Albers Museum in Bottrop. His works are in various international collections, including the Centre Pompidou Paris, the Reina Sofia Madrid and the Fotomuseum Winterthur.